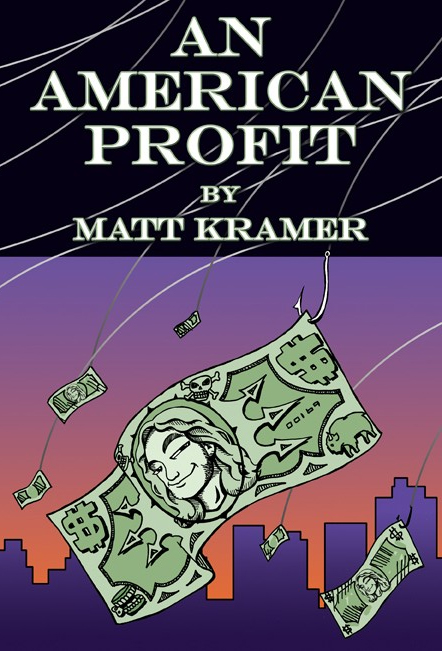 Matt Kramer the poet has been publishing his penned words for over three decades as a lyricist and song writer. His first literary release is a poetry book titled “An American Profit” (Lascivious Books) was released October 31, 2007.

A Miami native, Kramer made his name as the lead singer of a high profile rock band signed to a Atlantic Records. He toured the world and had hit records in the early 1990s, always writing words, lyrics, poems, and stories. His world travels, love of literature and musical genres that include jazz, blues, and opera opened new avenues to his writing.
“I write a lot of poetry these days, I think my take on poetry is a bit different from the norm,” Kramer says. “Starting my lyrical journey as a song lyricist I always pushed the envelope on the idea content, and with my poetry I make no exceptions. But I also choose more topics that a big bad rock star can’t write about, like the poetry I write when I’m at my cottage in Nebraska. My travels brought me to this cool little town of 300 people and coming from Miami it’s quite a different place. Last time I was there for 11 days and I wrote 33 poems in that time. They are more of a small town country feel that I could never express in my writing till now.”

Kramer’s poems dwell on the psychedelic swirl that is modern life: the current state of Florida’s Native Americans, his fellow rockers, the twisted dichotomy of religion, On The Road scribe Jack Kerouac, the business of show, the Three Stooges, and modern/false idols.

“Sometimes my writing is showing more of me than ever, the funny side, the quite sarcastic, sometimes very scary, as well as abstract,” Kramer says. “It’s a great way to mature my love for lyric.”

"A Book of Poems from the Smallest of Towns"

This poetry book shows a very personal side me, and his has a very warm down home feel to it compare to the edgy and sometimes sarcastic debut book “An American Profit”.  This is a deep inner perspective look into my writing and is the second of several poetry books already completed and slated for release at future dates.

All of my life I have been drawn to the simplicity and charm of small towns all over the world. This book of poems acts out the nuances and slight factors into tiny journeys that made these places and people leave such a profound mark on me… This is the creative side that I could never find an outlet for in my rock band, so it was a great creative segway into the different outlook on writing.  Matt

From small town cooking and apple pie to Grandmas old sayings in the poem “Noon Whistle”, to the ultra heart warming “Into the Purity Garden” this book is suitable for any nightstand or coffee table. Get yours today!